Electricity generation in Ontario is provided through a mix of Nuclear, Hydro, natural gas, reserve and solar/wind/biomass generation. 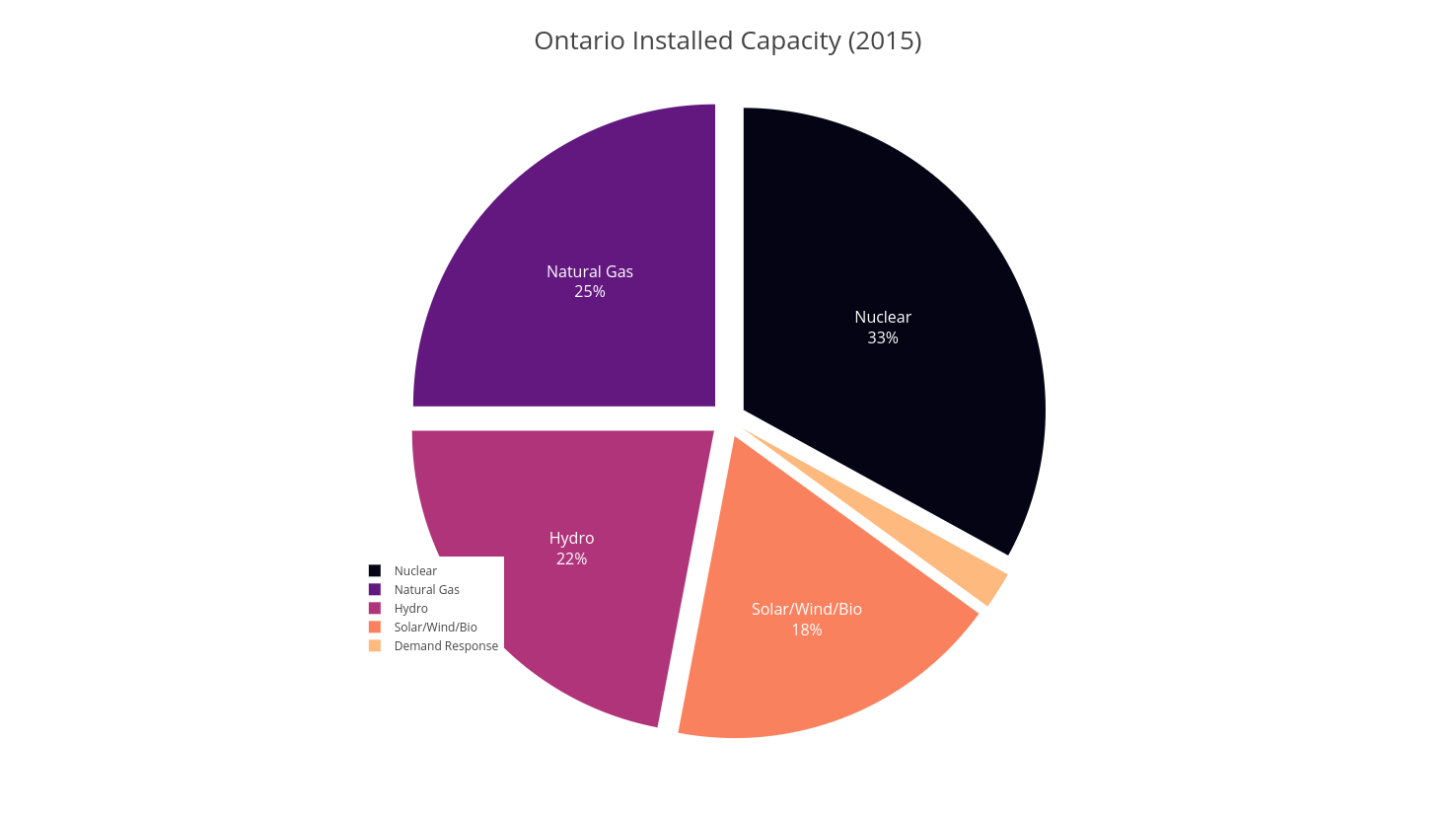 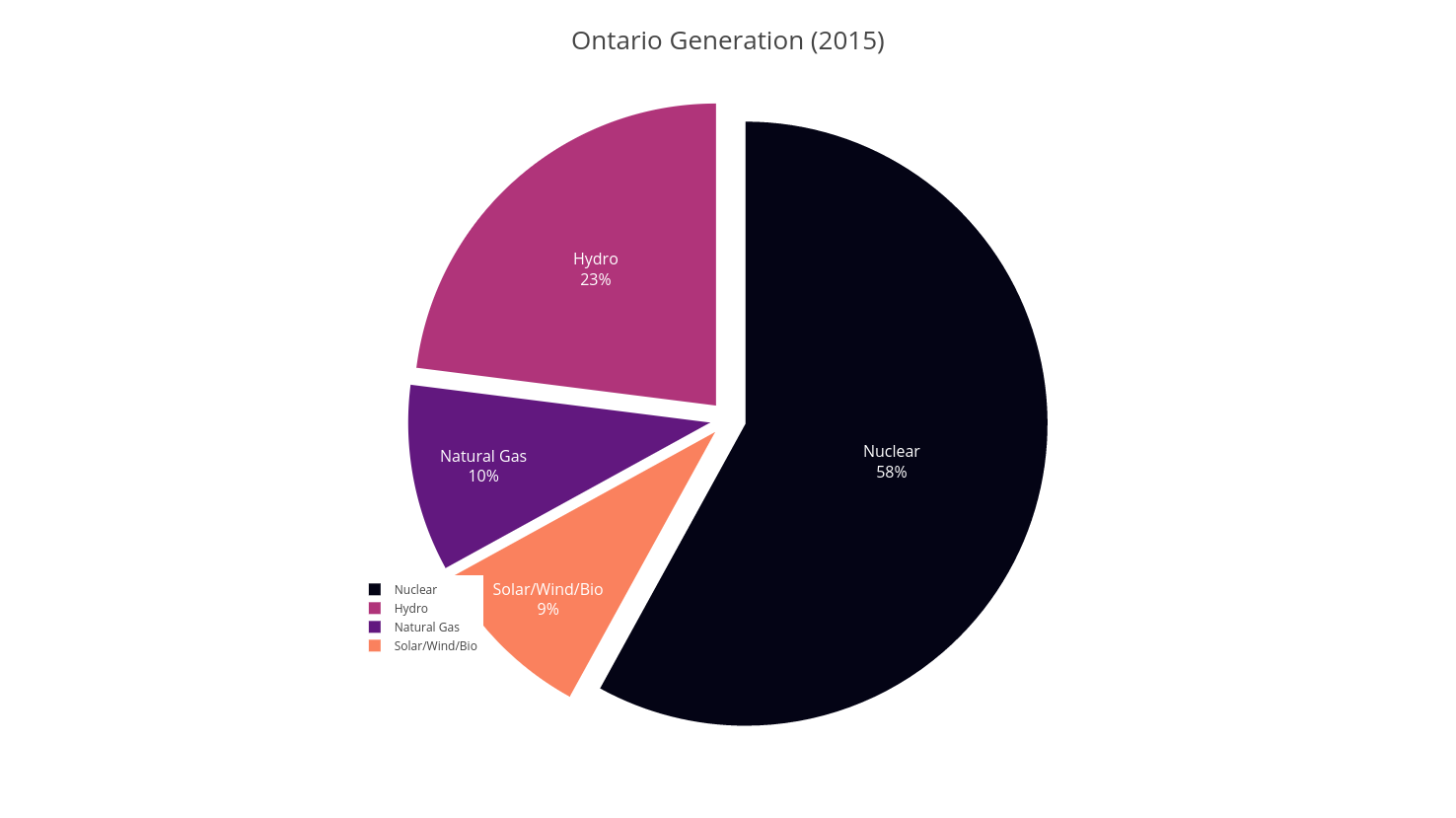 The previous Long-Term Energy Plan for the province was twinned with the Green Energy Act (GEA). The original GEA was supposed to foster investment in the Ontario production of wind and solar generators and technology that reduces energy demand such as LED light bulbs for traffic lights. The resulting job growth was part of the promise of the Ontario Liberals to use scaling-up of wind and solar to generate jobs to replace some of those lost in the closure of the coal-fired generation.

Instead of supporting the growth of public electricity generation, the Ontario government’s plan for electricity generation through solar, wind and biomass growth was to use feed-in tariffs and other subsidies to drive private investment. The plan was to push for private investment to pay for most of the growth in the percentage of and absolute amount of generation using solar/wind/biomass in Ontario’s supply mix.

The original Green Energy Act had a requirement that a percentage of all renewable products had to be manufactured in Ontario to get access to the public subsidy. However, this was challenged at the WTO, Ontario lost and had to remove this local procurement provision from the Act.

Ontario now has about 4,000MW of installed wind capacity and 2,000MW of solar power capacity.

One of these larger wind procurement deals was the 20-year power purchase agreement with Samsung which includes 140 turbines. In 2013, the government cut the original project by $3.4B leading to questions about the stability of the Ontario government’s green energy subsidy programs. While the project was completed in May 2015, in 2016 Samsung sold its stake the 270-megawatt project to Axium Infrastructure, Alberta Teachers’ Retirement Fund and Manulife Financial Corp.

On September 27, the Ontario government cancelled its latest LRP. This round of LRP was for about 1GW of “planned” growth in solar, biomass and wind generation. The cancellation happened after the period for open submissions the procurement process ended, leading to the private sector denouncing the cancellation for wasting their time and money.

The cancellation of LRP will not affect the growth of new private smaller scale developments that have access to public subsidies through the fee-in-tariffs (FIT) system. FIT is designed to support projects up to 500 kilowatts with a subsidy for electricity provided back to the grid.

The cancellation of the latest round of Large Renewable Procurement resulted in a loss of 1GW of new private renewable generation. This is small when compared to the 25+GW of extra capacity in the province’s regulated planned reserve. The reserve level is currently stable until about 2022. After 2022, there will need to be investment or the reserve will drop below the regulated amount. However, this needed new investment has already been mostly developed (or entirely depending on the model used) through the refurbishment of nuclear.

The cancellation of the procurement will mean a slower increase in the growth of subsidized private electricity generation. CUPE’s power workers, Progressive Conservatives and the NDP have been calling for the cancellation of new growth in subsidized power, albeit for slightly different reasons.

Contributing to the lack of need for growth in renewable contracts is the slow growth of storage capacity to deal with the increased solar and wind generation. We expect the upcoming (2017) Long-Term Energy Plan to deal with this in some detail.

About a third of hydro generation companies in Ontario are run by private companies. H2O Power is one of the most aggressive in Northern Ontario for smaller capacity. Others include TransAlta, Brookfield, and Innergex which have acquired older generation (or the companies that owned them).

Ontario Power Generation has most of the larger hydro capacity that is developed in partnerships with First Nations. Further expansion of small generation capacity will be both OPG and these private energy companies. These projects take a long time to develop and negotiate.